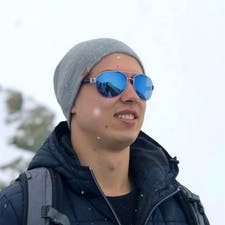 A pleasant and successful project. Thank you for cooperation!

Everything is great!
It’s not the first time I’m working with Eugen.

Everything is great!
I’m working with this client for the second time.
Very pleased with the results of the collaboration!

I liked working on this project. All expectations and demands were made in advance, and the customer quickly responded to any of my requests for explanation. I liked working with him and I hope I will have the opportunity to work with that customer again.

The collaboration went successfully.
I recommend it!

Everything is great!
Working with the customer is easy and pleasant.
I hope to cooperate in the future!

Everything is good! It was pleased to cooperate!

A great customer! I recommend cooperation!

Successful collaboration and an exciting project. I thank Evgenia for the high quality of joint work: the professional design of the project and the clarity of the task set.

A very interesting and knowledgeable project. It was pleasant to work. Everything at a high level. Thank you for cooperation!

A pleasant customer.
It provides constructive feedback quickly.
The position is as comprehensible as possible.
Thank you for the interesting project!

All is fine, thank you for your collaboration!)

Thank you for the interesting project.
Always open to new jobs!

The project was difficult...
The weak contact and directions, often contradicting each other, led to the fact that the film was awarded almost in the last minutes before the show.

Everyone is satisfied. The task is understandable, payment in time.

Everything is fine, the number of work corresponds to what is stated in the task, the directions are absolutely adequate and correspond to the task.Thank you for cooperation👍

Everything is great. It was a pleasure to work on this project.

A great customer. I recommend to everyone! I continue my cooperation.

A clear task.
They quickly and easily reached the right result.
Payment is received in full.
I recommend it as a good customer!

It is clear from the customer, I recommend cooperation. The task was not difficult, but due to the issue of system errors on one and the volume of the project turned into an adventure for the whole day.

I was happy to cooperate! )

Everything was fine, there was no fitback, I liked it.

Everything went well. I recommend cooperation.

We worked well, an interesting project. I recommend the customer.

A great customer. an interesting project. Always on contact for comments on the work. I recommend !

Everything went successfully, the customer was adequate.
I recommend it.

Everything went greatly. The repairs were very minimal. Plus a interesting topic.

I signed the NDA, so I won’t write anything about the project, but I will write that I’ve communicated 20 minutes on the basis and 2-3 hours on the organization.I have a little earlier micro-spoice on the garniture, built worse, but usually everything is heard if the dynamic turns.And here they said to have a new garnitur, I ordered it, with the roofs, with a rough micro, not pure for music, and I was told that they will not cooperate, I have already refused from the orders that time to clean up, and here it is, yet with the formulation that TZ doesn't like, as if in 20 minutes of communication you can write TZ on a large TZ.The cooperation itself went through the mediator to whom I leave this feedback.She went on to pay, it was okay.
When I put the task, I said to start with what I think should be described more to the end.
I did not understand that they didn’t like it, because nothing was done and done.
By contact, you will need to work with a lot of services such as zoom, Google Calendar and Telegram, and this is just the beginning, in general not hemorrhoic, but not when in zoom or Telegram everything agreed and everyone himself is monitoring that it will appear in time.The man who scrolls all appeared with a delay of 5-7 minutes, and I seemed that he was a bull, but maybe he was just so tired that he was unable to work productively.In general, the spending on the project was more than the profits.I do not advise you to refuse other orders in favour of this, at least at first time.

The customer provided the necessary access and created all the conditions for the performance of his work. I will be glad for further cooperation!

The customer has a specific business approach. He understands clearly what he wants. We found a common language in different countries.
Answers and directions are fast, by case, without water.
Honorar discussed, moved and agreed. After the work was completed there was a long agreement further (I understood so), but the payment was made in full as agreed, all honestly.
Who works quickly, clearly and ready to conduct dialogue with the customer = RECOMENDATION.

My fault is that he has not studied this post to the end, he is no. I thought that all emails have a function that allows you to send html messages. I recommended the customer to change the mail.
The work was done unless this misunderstanding was considered. The customer was adequate, all the information for work provided, the reservation was fast. In general, I will be happy to continue to cooperate.

A very interesting project. I am glad that I managed to work on him.
Thank you Eugene for cooperation.
Clear tasks, quick answers to emerging questions, adequate requirements.
During the expansion of the project arose force majeure circumstances that prevented me from giving up the project in time. I would like to thank Eugene for understanding.

A great customer, quickly solved all the issues arising during the work, was pleasant to implement the project. I recommend working with Eugene.

The customer is always in contact.
The whole work corresponds to TZ.

A great customer, a clear task.
Payment is not good.

Thank you for the interesting project, everything is fine. Hopefully it’s not the last time.)

The task was placed clearly and clearly, the employer explained everything well and was constantly in contact, with the payment was not delayed, I was easy and pleasant to perform the order!)

Everything at the highest level!
It was a pleasure to work with this client.
He clearly introduced the directions, quickly answered, greatly applied to all the design decisions.
Everyone is pleased)